Report 2010: Back from Zambia! Mission was difficult but successful.

Short Report on Work Trip to Siavonga/Zambia
Heiner Kraft and Dieter Lehmann were there for  DWLF May 19-28, 2010 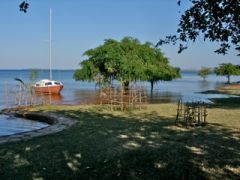 Dear colleagues in the struggle: finally arrived!! Departure from Frankfurt on Wednesday, May 12, on Ethiopian Airlines to Addis Ababa, from there to Lusaka.

Ethiopian Airlines is highly recommended because it allows  2 pieces of baggage, each weighing a max. of 23kg  (and they serve good Ethiopian coffee!). At the airport in Lusaka (50 US$ fee for visa—only US$ accepted!—and you fill out the immigration form there), we were met by Herman Striedl, PMG for DWLF in Siavonga and owner of the “Sandy Beach Lodge” in Siavonga. . .

The capital city Lusaka lies at an altitude of about 1600m and is therefore free of mosquitoes (malaria). The trip to Siavonga by car takes (under “normal” conditions) about 3½ hours (about 180 km of paved roads).

The DWLF helpers live at Herman Striedl’s “Sandy Beach Lodge,” beautifully situated directly on the shore of the artificial reservoir Lake Kariba (ca. 280 km long and up to ca. 40 km wide), very quiet, in the middle of nature. Because of this enormous body of water, the climate is more moderate and more pleasant than in other parts of the country. 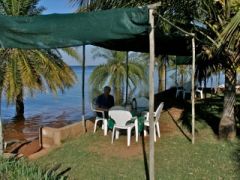 Herman (from here on “H.”) rents sleeping quarters to the helpers, a mini-house with 2 bedrooms (a double and a single), including shower and toilet. Breakfast and dinner can be taken in his restaurant with reservations (menu on hand). For helpers who want to spend less for overnight lodgings, Heiner has donated two tents with awnings (just about at standing height) that can be set up on the property. (The list of prices for expected expenditures will be included in a later, more detailed article.)

Because Heiner Kraft also donated a roomy, all-wheel-drive vehicle to DWLF, the daily commute (about 15 km of “nature tracks”!) from Sandy Beach to the hospital in Siavonga, where DWLF has set up its dental station, is provided for. With this service each person is charged per kilometer for use of the vehicle (money set aside for repairs and replacement parts for the vehicle, e.g. tires, brakes) besides the cost for diesel.

On our first visit to the hospital, we got to know the 5 dental therapists (3 women, 2 men) and the conditions there in the hospital. The treatment room used up to now is pretty much “packed full,” equipped with a used unit recently donated by an Italian organization, which has only one turbine and no motor for the corner-piece. Among the dental 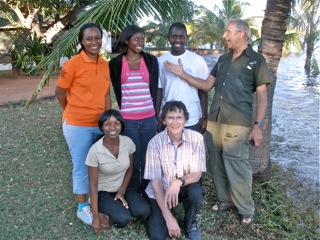 equipment donated by the Italians  we also found  an adjustable Technik micro-motor, which we installed on the treatment unit and fitted out with a corner-piece, so that caries can be removed at this unit as well. An old but still useable heat sealer is on hand, along with a roll of tubing. Additionally in this room there are also a compressor, a dental x-ray sphere, a moveable “silent assistant,” a desk, a donated autoclave (function?), a refrigerator for materials, a capsule mixing machine (for glass ionomer capsules among others) and a work counter with storage beneath.

Now there are three rooms set aside for DWLF in the hospital: 2 treatment rooms that, under the direction of Herman Striedl, had already been set up to the tried-and-proven standard plan devised by Dr. Wolfgang Credner of Berlin, with under-cabinets handmade from native wood, a work surface with built-in sink, tiled floors, tiled walls, appropriate electrical outlets, ceiling lighting and drainage system.

The third room is for disinfection / sterilization, fitted out with a combo-unit of stainless steel with sinks; 2 compressors have been installed there and the room is partially divided off with a handbasin and toilet for the workers. In the hospital sterilization is normally carried out centrally (delivery of the instruments in the usual sterilization tubs); but, if necessary, sterilizing can be done in the dental station itself using the two little autoclaves delivered (primarily intended for outreach).

The equipment that had finally arrived had also been unpacked in the meantime.
It was our task now, amid the handcrafted “master work” of Herman Striedl, to correctly install and mount the brand-new units, hook up to water, drains and electricity, and, with the turbine, corner-piece, ultrasound plaque remover and last but not least oral camera complete with monitor, to make everything ready for the missions.

It would be going into too much detail to list all the smaller and larger “little problems” that surprised us in this task. But it must be stated that, for instance, you couldn’t simply “pop around the corner” to get that special, missing screw; besides which the so-called operation instructions that came with the unit were unfortunately all in Chinese. With Herman Striedl’s energetic help, organizational talent, and his connections (e.g. to Chinese engineers in Siavonga who translated the important parts of the instructions), we were able, after about a week of intensive work, to use the 2 new dental units for treating the first patients. 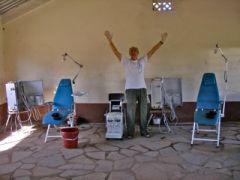 And besides all that, the instruments that had also been delivered were looked over and put away by the dental therapists, who would go on performing their daily treatments in the “old” room. Heiner Kraft could assist them from time to time in treating difficult cases. There was a further task of making the 2 new, Chinese, portable treatment units ready for missions; to assemble, with the dental therapists, the 2 transportable patient-chairs with halogen lamps; and to get the 2 surgical suction machines and the 2 generators ready to go. After these jobs had been mastered, we me with the 5 dental therapists to familiarize them with the operation, servicing and care of the new equipment.

A multitude of organizational necessities, e.g., where to get distilled water, how we would organize the “outreach” treatment, what would be needed for that, etc., had to be cleared up. Many team discussions, especially with Herman Striedl as PMG for Siavonga, and collaborative development of ideas were needed to find satisfactory and sensible solutions.

In Zambia there is a dental school only in Lusaka, in which students can be educated by a dentist with a technical school certificate in a 3-year course leading to a “Dental Therapist with Diploma.” Therefore people are very interested in further training in proven and effective methods of dental treatment, and their desire was for us to expand their knowledge about root canal treatments.

Heiner Kraft and I have now started, in afternoon meetings at Sandy Beach, to pass along the basics of a simple root canal treatment to the 5 dental therapists. As learning aids and visual material, we have compiled corresponding teaching material (copies), furnished with technical terms in English. With the teeth they have extracted, they have practiced a simple but effective preparation technique, using the root canal instruments we had brought along (reamers, files, etc.), a VDW interim-stand and gauges. Because there is a modern apex finder (China) as well as an x-ray machine (parallel technique possible) on hand, we hope that subsequent dentists will continue this training in RC treatment. (Due to the conditions thereat the moment, practicing with the equipment is neither sensible nor desirable.)

At the end of our stay we planned two days of outreach treatment with the teams, as a sort of trial run, first at the “Namumu Orphan Center” in Siavonga,  an orphanage and school.
Here the dental therapists gave advice on brushing teeth and nutrition. In conjunction with the presentation, the 2 treatment teams conducted examinations and treated about 25 children, using the 2 portable units and treatment chairs.

Our experiences from this were analyzed and the difficulties that arose were remedied, when possible, and the whole procedure improved in its details. Consequently we were able to achieve a considerably “smoother” work flow, more effective and relaxed, during our second mission on the following day.

On this second mission we visited the Mubuyu Christian Academy, a secondary boarding school for girls. This school was built with funds from the German Development Ministry, also with the collaboration of Herman Striedl. The Minister of Development at the time, Ms. Wieczoreck-Zeul, personally dedicated this school in Siavonga. Overall it can now be said that, except for a few little things, which will be taken care of by Herman Striedl in the near future, DWLF’s fixed dental station at the hospital in Siavonga is ready for the dentists and dental student teams on mission, and outreach treatments in kindergartens and schools can also proceed.

In conjunction with the regular AIDS-relief campaigns through the hospital in Siavonga (donor for that is the “Bill Gates Foundation”), accompanying dental teams can also treat patients in the villages visited, using the “portable units,” without incurring additional transport costs. A group of two or three (a maximum of four, however) can work effectively at the same time in Siavonga. Herman Striedl, as PMG and hotelier, will care for the group competently and helpfully, standing by in word and deed and administering the organization. That’s the kind of person we have come to know him to be and to appreciate. We and DWLF have a lot to thank him for, and without him the DWLF project in this form would not have been possible.

Heiner Kraft, through his generous donations, has also contributed crucially to its realization. Of course we don’t want to neglect mentioning that Heiner and I indulged ourselves in 2 days of “down time.”

On one of those days we were invited to attend the 50-year anniversary of the opening of the Kariba dam, which is right by Siavonga. Fifty years ago the dam was dedicated by the “Queen Mum.” On a Sunday, we made a little trip to a “canoeing camp” on the Lower Zambezi (below the reservoir dam). There we could watch monkeys and various kinds of birds close-up and even, in the distance, a grazing bull elephant. The hippos unfortunately preferred to splash around further away from our vantage point; we could only hear their typical, loud grunting and, with a bit of luck, see the top of a head surfacing briefly. Still, an awesome experience.

Because the Zambezi is running high at the moment, the water surface is up to 3 m higher than normal, and of course 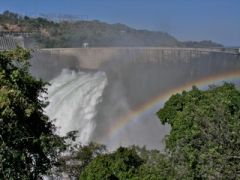 Lake Kariba is more than over its banks so that all the sluice gates on the dam are standing open to let water flow out.

Directly at the dam: an imposing spectacle as the raging waters plunge into the Lower Zambezi with a deafening roar. Sunrises and sunsets, the play of clouds, the nightly starry skies (with Southern Cross), the quiet on the lake, breakfast and dinner on the lawn at “Sandy Beach,” right at the water’s edge, all make up for our hard work. 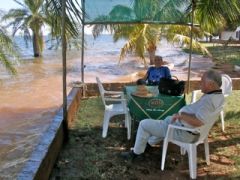 Because there is mostly a wind down by the lakeshore (depending on the time of day either on- or offshore), the plague of mosquitoes isn’t too bad, and a lot of bats help in the evening to keep the mosquitoes in check.

An article that should appear soon will carry a price list and other particulars.

P.S. In Lusaka there is the “Gospel Outreach Fellowship”  (www.go.org.zm). This church congregation of Pastor Helmut Reutter will be installing, again with the help and advice of Herman Striedl, a used dental treatment unit donated from Canada in their rooms and thus found a dental station there. Pastor Helmut Reutter would welcome it if German dental teams could stop by there for a day or two (or even more) and treat patients before they travel onward to the DWLF dental station in Siavonga. In return they would receive free overnight lodging in the small attached hotel and have a chance to look around Lusaka, the capital city. Because the dental unit has not yet been installed and the procedures have not yet been finalized, they are looking for colleagues with a bit of pioneering spirit who would like to help out. For more details or further inquiries, email Dr. Heiner Kraft:  heiner.kraft@t-online.de 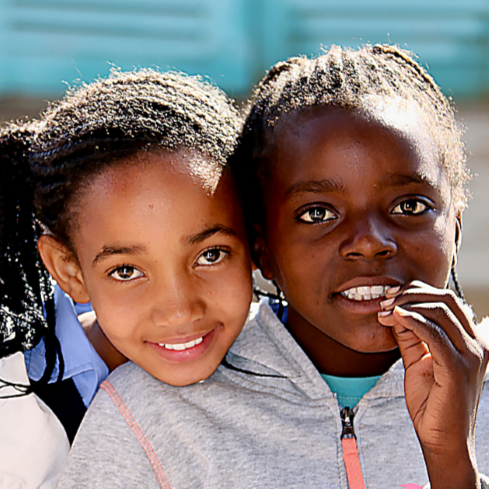 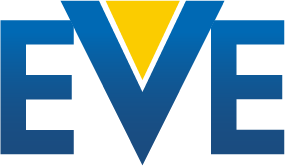 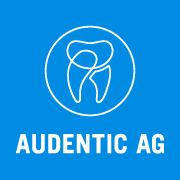